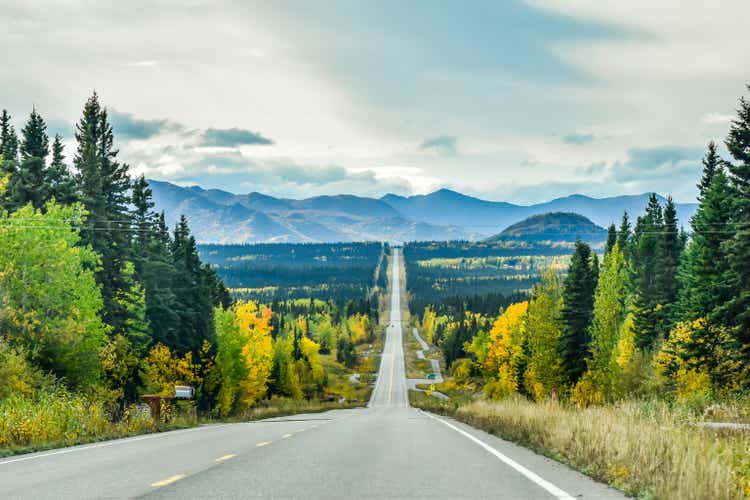 Northrim Bancorp (NASDAQ: NRIM) is one of three major local banks in Alaska. The state as a whole has less than a dozen banks operating there; a few are from Alaska and the rest are national banks with operations in the north. Given the obvious lack of banking competition in Alaska compared to the 48 mainland states, Alaska banks have proven to be attractive investments. The same goes for Hawaii.

I wrote Northrim Bancorp in May 2020 as a value play that investors were too worried about at the time. Two of Alaska’s main drivers – oil revenues and tourist arrivals – seemed to be in serious doubt given the economic conditions at the time. Since then, however, oil has rebounded from historic lows to its highest level in a decade. Meanwhile, while tourism still has pandemic-related issues, things are starting to normalize on that front as well.

Overall, Alaska has recovered reasonably well from the pandemic. The GDP figures have not yet been particularly exceptional, but things could have gone much worse. And with commodity prices soaring, there should be plenty of new investment in Alaska in the months and years to come. Either way, Alaska’s banks have weathered the pandemic well. In fact, Northrim has actually posted much better than average earnings results for 2020 and 2021 and the stock has doubled in the past two years from lows.

Even after doubling down, however, Northrim still looks extremely cheap. Shares are trading at just 1.0 times book value and 8 times earnings, even though the bank achieved a mouth-watering ROE of 16.3% in 2021. And, in theory, things could go from good to even better as key commodities in Alaska’s economy such as oil, gold and copper are absolutely on fire. With commodities roaring and interest rates soaring, Northrim seems like an obvious steal at 8x earnings, right?

Yes and no. I think the stock is a buy here, however, it’s not as obvious as it first appears.

To be clear, there’s absolutely nothing wrong with the long-term story. And, the stock has fallen from $45 to $40 in the past two weeks, so there is a small downside buying opportunity. That said, community and regional banks have been bombed lately, so a 10% drop doesn’t set off my bargain-hunting alarm just yet.

The key question here is whether Northrim was earning too much in 2021 or not; in other words, will we see the bank’s EPS and return on equity fall back to more historic levels?

It basically comes down to the very limited number of banks in Alaska. If you want to get a mortgage or business loan in Alaska, you don’t have many options. Additionally, given Alaska’s geographic isolation, there is more friction in the housing market. When a company needs to hire people, it often has to bring in non-Alaskans, forcing people to move in from the lower 48s. margin, and you have conditions that support a lot of activity in the housing market.

Couple a meteoric economic recovery for Alaska with a less competitive local banking market and rock bottom interest rates, and it was the perfect time to be Northrim’s mortgage banking business. This will be much less true in 2022, given the historic spike in mortgage rates over the past six months.

Another factor is the PPP loan program. Northrim has been extremely successful in distributing these loans. After barely growing its total outstanding loans between 2017 and 2019, Northrim grew its loan portfolio by almost 40%, largely thanks to PPP loans. Northrim’s overall loan portfolio declined slightly in 2021 as rapidly declining PPP balances more than offset solid growth in the company’s other business areas. The continued trickle of PPP loans will again hamper Northrim’s ability to grow in 2022, even given the tailwinds of high commodity prices for the Alaskan economy.

Now, on a positive note, there appears to have been a considerable number of new business relationships for the bank as a result of the PPP loans. Northrim’s loan portfolio appears to be stabilizing at a much higher level than what we observed before the pandemic. However, the revenue growth we have experienced over the past two years should not be extrapolated into the future, especially as we will now see the mortgage underwriting industry face challenging conditions. much more difficult markets as well.

On the bright side, Northrim currently has a relatively large cash position (held in interest-bearing deposits with other banks), which gives it the flexibility to adjust to rapidly rising interest rates. short-term interest. It also gives it the ability to lend to Alaska’s economy if loan demand takes off in the wake of triple-digit oil prices.

Valuation: Putting it all together

Northrim has achieved a 10-year median return on equity of precisely 10.0%. According to my rule of thumb that one can pay a bank’s ROE divided by ten in terms of book value, this would suggest that NRIM stock is worth exactly 1.00x book value. Easy enough. NRIM stock is trading today at – drum roll please – 1.04x book value. So the market has done a pretty much perfect job of pricing in all available information, right?

Not so fast. The thing is, Northrim hit that median 10% ROE over the course of a decade, which was far more bad than good for Alaska’s vital energy industry. Northrim’s ROE only dropped to 7% even in 2017, and rebounded to 10% before the pandemic when oil was still in the $50 and $60 range.

Over the past two years, Northrim’s ROE has been 15.3% and 16.3%, respectively. If the bank can produce 2020-21 style returns going forward, it would be worth at least 1.5x book value, which would represent a nearly 50% upside to the stock price from ‘here.

Additionally, Northrim has been a strong performer in terms of the composition of its book value (see chart above). If the stock is worth 1.5 times book value, say, it should be near $60 today, and a fair price target would move well into the $70s over the next two years, just at from its usual rate of book value accumulation. This type of upward trajectory in fair value becomes rather interesting when you are buying from a starting point of $40.

Skeptics will say that Northrim will not be able to repeat the results of 2020 and 2021. Mortgage activity will calm down with much higher interest rates. And perhaps Alaska’s oil and other commodities will also run out once again. I’m a long-term bull on oil, so I have a positive outlook for Alaska and this bank.

You can make a decent case that a longer term “reasonable” ROE target for Northrim is closer to 13% rather than the 16% it generates today. 2021 has been an unusual earnings year for the bank, I would concede, but I also wouldn’t bet on Northrim’s 10% ROE and oil crisis years’ EPS slowdown as the new normal. Somewhere in the middle, like 13%, seems fair.

With an ROE of 13%, I’m willing to pay 1.3x book value or $50 per share for Northrim today. This seems like a reasonable balance between Northrim’s currently stunning profitability metrics and the real risks of regression to the mean over the next two years. If we knew Northrim would continue to cough up 16% ROE and earnings per share levels in 2021, the stock would be a screaming buy here. But some caution is in order, especially given Northrim’s reliance on underwriting mortgages for a substantial portion of its revenue.

That being said, the market is currently pricing Northrim as if it’s doing no better than it was in, say, 2018. There’s virtually no premium to book value right now, even though there this is a bank that deserves at least a modest one. The bank also offers an attractive dividend yield of 4.1% – and, I should add – that’s a yield that has grown by more than 10%/yr compounded over the past five years.

I can easily make the case for buying Northrim today. Like I said, I think the realistic fair value is around $50 per share today versus the current quote of $40. And then from $50 I would look for Northrim to offer something along the lines of 11% total returns per year. These are quite attractive numbers. And, arguably, the tail risk in my estimate is on the upside if inflation/commodities stay hot longer than expected and Alaska’s economy experiences a gold rush period.

The stock is undervalued and has solid medium-term prospects. On the other hand, earnings are expected to be down in 2022 from an exceptionally strong 2021. Stocks are cheap, but I understand why they are cheap, and I don’t see much that would change the market’s view in 2022. All that to say that Northrim looks undervalued, but it’s not unreasonable to expect it to remain undervalued until mortgage rates stop rising and we get more clarity on the price of oil which will stabilize over the longer term. NRIM shares are attractive at current prices, however, the shares may not rebound until 2023.