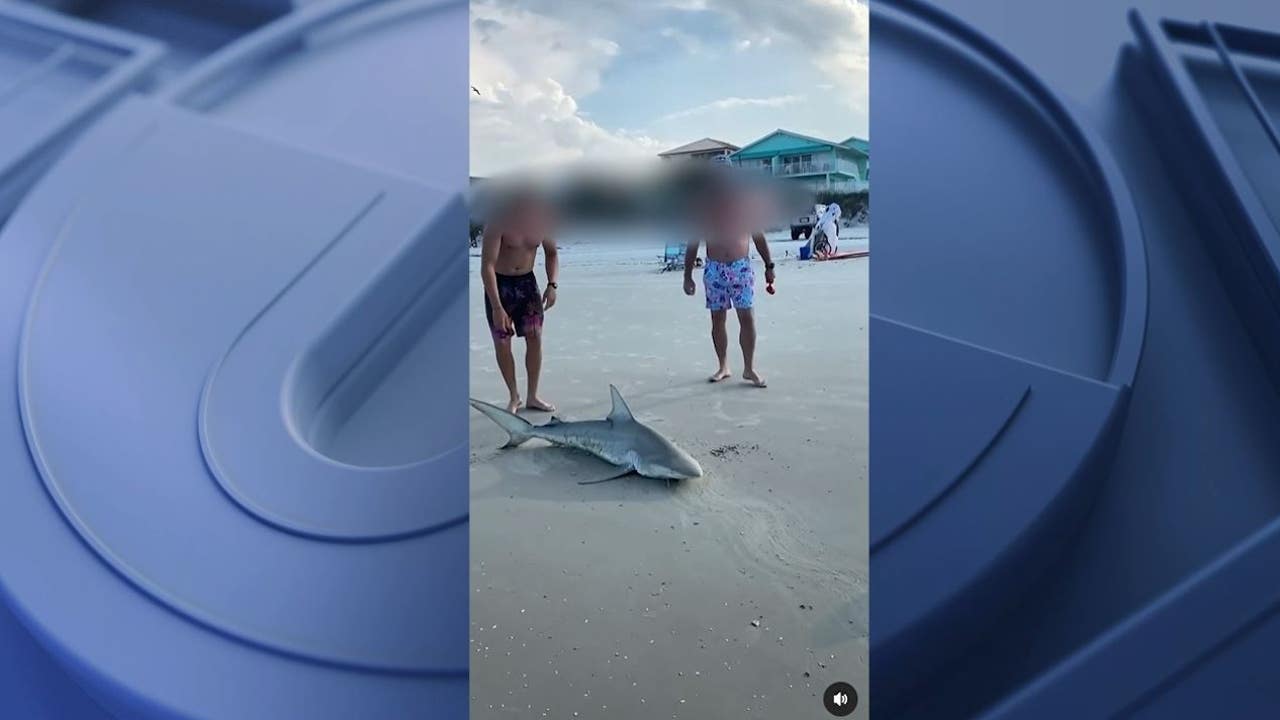 Controversial video shows 2 men catching a shark on a Florida beach, then stabbing it in the head – it’s legal

Shark dragged out of water on Florida beach, stabbed in head

Shark fishing is legal in Florida, though a new video making the rounds is sparking conversation – and outrage – about the practice.

NEW SMYRNA BEACH, Florida. – Shark fishing is legal in Florida, though a new video making the rounds is sparking conversation – and outrage – about the practice.

The video shows two men pulling a shark out of the ocean in New Smyrna Beach, Florida. Moments later, one of the men stabs the shark in the head with a knife to kill it, then does it again moments later.

Mariana Sabogal was at the beach that day and saw what the two men were up to. She didn’t like what she saw, asked the men to stop and started recording a video on her cell phone.

“Can you please put it back?” Sabogal asks the men. “You shouldn’t do this with animals!”

“You put it back,” one of the men replies, appearing to have a red mallet in his hand.

“Why do you do that?” screams the woman after one of the men stabs the shark.

“It’s natural,” replied the other man.

In the video, one of the men said he was going to take the shark home to “feed his family”.

Sabogal posted the video on his Facebook page on Friday.

“I am speechless,” she wrote. “This is the world we live in and unfortunately we have to accept that there are people in this world who find pleasure in doing this. We need more awareness and education about sharks, and better laws to prevent and punish this type of behavior. Being a shark lover, I feel like I saw someone kill an incredible creature for no reason.”

She told FOX 35 that although she knows shark fishing is legal in Florida — and requires a license — she felt that these two men were treating this particular shark in a cruel and “very inhumane” way.

The Florida Fish and Wildlife Conservation Commission told FOX 35 that it is aware of the video and that it is “standard practice” to euthanize sharks after landing. “This video is not currently under investigation as no violation of state law regarding method of harvesting has occurred,” FCW said.

Because no crimes are being investigated, FOX 35 blurred out the faces of the men depicted in the video.